My whole adult life, I have had problems in places with loud noises, lots of smells, etc., and I could never figure out why. Then I remembered and incident when I was in high school.

It was on my 17th birthday, in 1988, when a pipe bomb went off in a kid’s locker right across the hall from mine. A student a year older than my class had been bullied for years by the jocks.

My high school was small, in a small town, in rural Upstate NY, about 15 miles east of Buffalo. I went there from kindergarten until I graduated, and many of us knew each other that entire time. The middle and high schools were actually 3 different small towns, which had their own elementary schools.

Our school was all cliques. (I didn’t belong to any of them.) It was a good school, with an occasional fight, but that’s pretty much it. The school had a giant corn field across the street where kids would go to smoke, but that was the extent of naughty.

The jocks were exceptionally brutal, male and female. I was bullied for several years by the older girls there. I even got punched in the face once, but nobody really did anything about the bullying.

It pushed one kid over the edge. His friend got access to the master keys for our lockers. He crafted a mercury-switch pipe bomb, and put it in the sneaker of the bully.

It was just after homeroom when the bomb went off. (I am getting chills and close to tears writing this, because I never have before.) My clothing and books had blood on them. There was mass confusion, but one teacher got the victim to the nurse’s office, and we all went to first period.

We were on lockdown. At the time, we had a foreign exchange student, Natalia, from Spain. Our school had phones in every classroom, and I called hers to make sure she was ok. The school’s phone lines were all overloaded, as this was 1988.

Word got out, and the news showed up. We were locked in our classrooms for several periods, and were finally released early so the investigation could continue. At this point, nobody knew WTF had happened.

I finally realized last weekend that I have PTSD from this. THIS was that loud noise that has made a lot of events very grueling for me. Just a couple weeks ago, I had to leave one of my favorite networking events because the room got so loud, I started to panic. I can feel it, even now.

I did a quick Google search of the incident, and found a tiny newspaper clipping. This was the day after, so nobody knew quite yet what had happened. 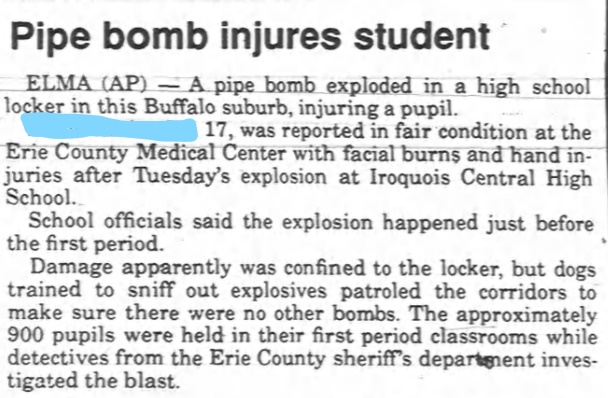